January means Seville Oranges which, of course, means Marmalade! Make sure you have a good sharp knife to cope with with the lengthy job of shredding the orange peel which is at the heart of a good marmalade. The job is always fiddly and best done with company, so Libby and I set to work. After much chopping and peeling and chatting all the peel, juice, pith and pips were simmering away into a suitable softness. If you’re after a recipe to try, give ours a go! 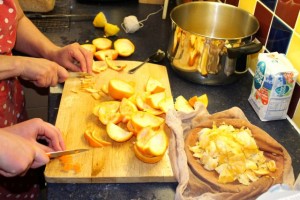 Cut the oranges in half and squeeze the juice into a large pan through a sieve to catch all the pips.
Using a spoon, scrape the pith and flesh from the orange peel and put to one side.
Carefully cut the peel into thin strips. The peel swells a bit, so remember to make them a little thinner, but it’s up to you how fine you like your marmalade peel.
Place the peel in the pan with the fruit juices and water. Tie the reserved pith, flesh and pips in a large piece of muslin to make a bag, and put this in the water too. This will provide the pectin for your marmalade to set with.
Bring to the boil and simmer for an hour or two, until the peel has softened, and the liquid reduced by about a half.
Remove from the heat and squeeze the liquid from the muslin bag into the pan. You can get rid of the pips and stuff now, you should have enough pectin in your mix.

Add the sugar to the pan and stir to dissolve.
When the sugar has dissolved, return the pan to the heat and bring to the boil.
Boil rapidly until the setting point is reached, then remove from the heat, skim any scum from the surface and leave for 15 minutes before putting in warm sterilised jars. Seal the jars and leave to cool completely

Once the marmalade is boiling rapidly, it looks quite frothy and exciting. The only thing to consider is the elusive “setting point”. This is normally reached once enough water has evaporated to allow the marmalade to reach 105degC so the pectin is activated and will make the jam set. I have gone for accuracy in the form of a Digital Candy Thermometer, with a handy pan clip and an alarm as the desired temperature is reached. You can also test the marmalade for setting by putting a little of it on a cold plate and seeing if it wrinkles when you push a finger through it. In fact it is always best to try this even if you think the temperature is there, as sometimes you need to get the jam or marmalade just a bit hotter, so I put a plate in the freezer to cool too.

This combination has worked well for us, and we now have a years supply of yummy marmalade cooling on the counter. 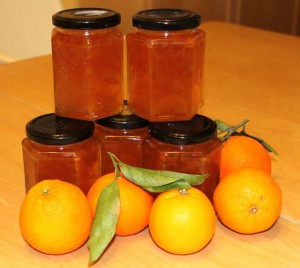 Making marmalade in the fiveotherwise kitchen