Well Halloween is here again and the kids want to go around the neighborhood trick or treating as usual. I seem to remember that before that we used to go around with a hollowed out turnip and knock on the doors of people we knew. Now it is pumpkins, costumes and every door that has a light on. It’s moved on and I think got a bit better, though somewhat commercialised in parts. We try to stay away from that and stick to made up costumes and hollowed out pumpkins where possible. We bought 4 small ones this year so everyone could have a go, we also got some really good sharp knives that did an excellent job of cutting through what has always surprised me as very tough skin.

Cassie started off by cutting out the top and marking up the front face then removing some of the flesh with a spoon.

Lid off and flesh removed

Then she began carving the face out with a good sharp knife. Which makes it easier. Best to have an adult do this part if your kids are too young.

After Cassie the other kids did theirs and after much clearing up the finished four pumpkins were ready. (Sam is too small yet to have his own!) 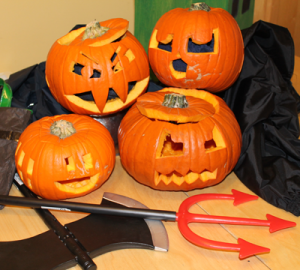 Well the evening went very well, with kids all over the street and too many sweets being given out. The only problem that remained was what to do with the leftover pumpkin. Well this year, as always we try to use it up. It’s never easy as it’s not been favourite, but we tried a simple roast pumpkin and stock soup accompanied by a pumpkin and rosemary soda bread. It turned out to be a huge hit with everyone. 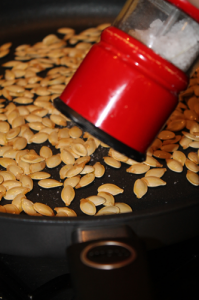 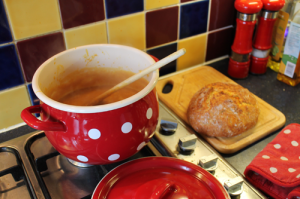 Well we still have loads of leftovers to use up so I expect we’ll be trying other recipes in the very near future. I hope you enjoyed your evening.